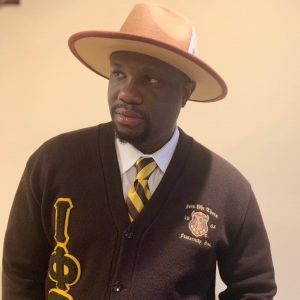 Initiated into the Fraternity through the Beta Epsilon Chapter of The University of Cincinnati in 2002, Brother David Finney has served Iota Phi Theta with stability and vigor for over ten years.  His fundamental principles are what set him apart from his colleagues.  some find that his collaborative planning and visionary decision-making are the qualities people have trusted the most.  Reasoning that problems are overtime expired in regard to Brother Finney.  Given the stability and increased prosperity under his care, it is clearly evident that he has the insight, influence and imagination to set a luminous brand and move his peers.

In the fall of 2007, Brother Finney became the Assistant State Director of the Kentucky Chapters.  Within a year he chartered a chapter and re-activated three chapters.  While in there he helped form the Gamma Nu Omega Chapter.  Brother Finney’s focus on imaging and brotherhood proved to be insurmountable but his most impactful initiative was the establishment of the “Hot Fire” motif.  This unique branding successfully generated interest, gave steady appeal and non status quo programming, which are still used throughout chapters in Kentucky.  In 2014, he was appointed, by the Ohio State director as the Graduate Advisor of the Beta Epsilon undergraduate chapter.  Brother Finney was voted the Vice-Polaris of Gamma Xi Omega in 2015 and then became Polaris in 2019 to present day.

Brother Finney’s energy and ability to make things happen are just as prevalent in his personal endeavors as they are in Iota.  In addition to being a Research Specialist, Brother Finney holds a Bachelor of Science degree in Chemical Technology from the University of Cincinnati along with certifications in operations and leadership development.  Professionally, he has spent his entire career leading multi-discipline teams in both the academic institutions and private sectors.  He once served as the research assistant in Cincinnati, Ohio and also held several project management positions at Cincinnati Children’s Hospital Medical Research Center.  In his current role as Infection Prevent Specialist, Brother Finney not only oversees various projects and manages health surveillance but also develops budgets and refines existing standard procedures.

A native of Cincinnati, Ohio, Brother David “Finn” Finney is the current fraternity representative for the African American Culture Center scholarship foundation and for the University of Cincinnati African American Alumni Association.  He is a member of the Gamma Xi Omega Alumni Chapter in Cincinnati, Ohio where he currently resides.  In the true spirit of Iota, he continues to embrace change and envisions a future while keepings its traditions alive.  From his sharp business efficiency and can-do attitude to his notable contributions and ability to build with out borders, Brother Finney’s incredible balance of solidity and creativity are what makes him a true visionary and the most valuable asset to any organization he leads.