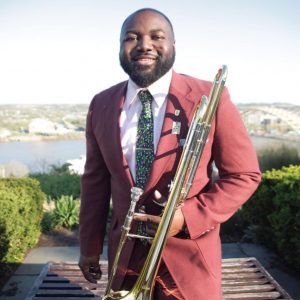 Branden D. Smith is a graduate of Central State University in Wilberforce, OH, where he earned his Bachelor’s Degree in Music Education and served as staff arranger for the Central State University Marching Band Program. Mr. Smith then went on to earn his Master’s Degree in Music Education from The South Carolina School of Arts at Anderson University, where he completed his research thesis entitled “The HBCU Marching Band: The Underground Railroad for African American Students to Higher Education.”

Most recently, Mr. Smith has served within Cincinnati Public Schools in Cincinnati, OH, where he served as the program coordinator and teacher lead for the Black Music of America fourth grade district-wide instrumental music start-up initiative, which provided over 20 elementary schools with musical instruments and private instruction based upon curriculum ranging from the Music of the African diaspora, Early Jazz through today’s hip-hop and R&B. In addition, he has served as Associate Director of Bands at Aiken High School and Director of Bands at Roberts Academy. Mr. Smith served as Director of Bands at North College Hill High School in Cincinnati, OH, from 2014 to 2019. Under the baton of Mr. Smith, his students and ensembles have earned consistently superior and excellent ratings at district and state marching band and symphonic band festival contests. Under Mr. Smith’s leadership, his instrumental ensembles have boasted a 100 percent graduation rate and over 8 million dollars in musical scholarships earned nationwide.

Mr. Smith is an avid trombone player within the Cincinnati area as he often performs with The University of Cincinnati Community Band and is a member of the All Saints Church of Cincinnati, OH Brass Quartet. Mr. Smith also sings Bass with the Cincinnati Symphony Orchestra Classical Roots Community Chorus. He often serves as a guest clinician, arranger, and drill writer for various high schools and universities within the Midwest region.

In addition, Mr. Smith served as a contributor and editor with the 2022-2023 Ohio Department of Education Fine Arts Standards Committee. Mr. Smith is also a member of Iota Phi Theta Fraternity Inc. and presides as Vice-Polaris of the Gamma Xi Omega Greater Cincinnati Alumni Chapter.